bLOG: Be Water My Friend 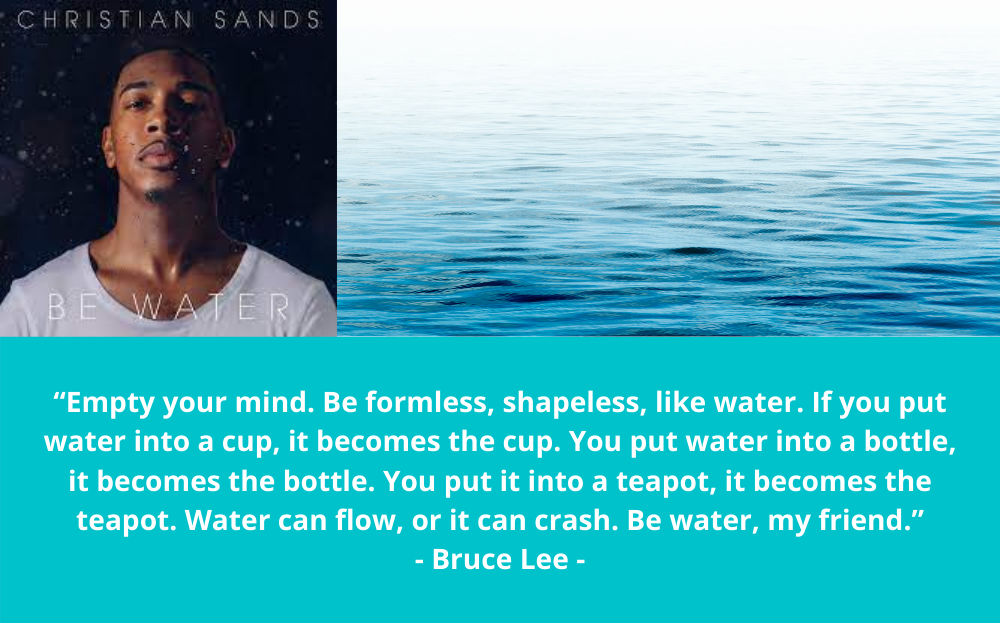 “Be water my friend.”

A quote from Bruce Lee that I had heard many years ago but hadn’t considered again until I heard a new(er) album Be Water from the brilliant musician Christian Sands.

Writer’s note: if you haven’t heard it, grab some headphones, block off 1 hour and 4 minutes and have a listen.

After listening to the album and reading more about the philosophy that served as its inspiration, it occurred to me how transferrable it all is to us. Us being other humans. And in particular, those in the self-employed, independent contractor type of existence. But really, all of us.

The direct quote from Bruce Lee is this:

Or in other words, in order to survive, progress, thrive or exist effectively, you must adapt yourself to the shape of whatever vessel you find yourself in.

For the record, the word adapt is my favourite of all the words in the previous sentence.

The idea does raise a question though.

Is morphing yourself into whatever situation you find yourself in, a form of submission or resignation?

Does it allow for creativity, self-expression or even the idea that you, the practitioner, can actually change the shape of the vessel?

I suppose the idea can be pulled apart in any direction, but the over-arching concept is brilliant.

The very idea that when change arrives on our doorstep, that we should have the ability and flexibility to find a way to thrive in that new vessel. As opposed to the common human instinct of resistance, frustration and urge to fit our square peg into the round hole.

In a recent virtual conference with our friends in the Richard Robbins group (RRI), the consistently brilliant Doug Bolger spoke of the importance of being more generous in our interactions. How critical it is to bring more empathy, understanding and awareness to our interpersonal interactions. In others, being more like water and being conscious of the vessel we find ourselves working with, or in.

When I look at our real estate industry, we have had enormous change over the last 5 years. Or 10. …or 15. And it is increasingly clear that there are significantly different feelings about that shape-shifting element of our industry.

There are those with the mindset of almost seeking out the next new ‘thing’ to introduce to their day-to-day. Innovation excites them. In fact, they need it to keep their wheels turning. “So, yes, bring on the next vessel that I can morph into!”

Others will acknowledge that the new vessel is before them but would also like to keep their current vessel if it’s ok with everyone else. Otherwise known as the Late Majority. They’ll come along eventually but often not without a fight or influence.

Then there are those who lag behind, otherwise known as the Laggards. They will complain, talk about the old days and often get left behind. Their vessel is right up there on that shelf. "Let me get it down, dust it off and show it to you!"

If you want to read up on that more, google “Diffusion of Innovation Theory” :)

So, back to the Sands album. It is an album of 10 tracks, each of which show his ability to adapt and morph his way through 10 thoughtful pieces of music.

Acknowledging change and figuring out how to make beautiful music with it.